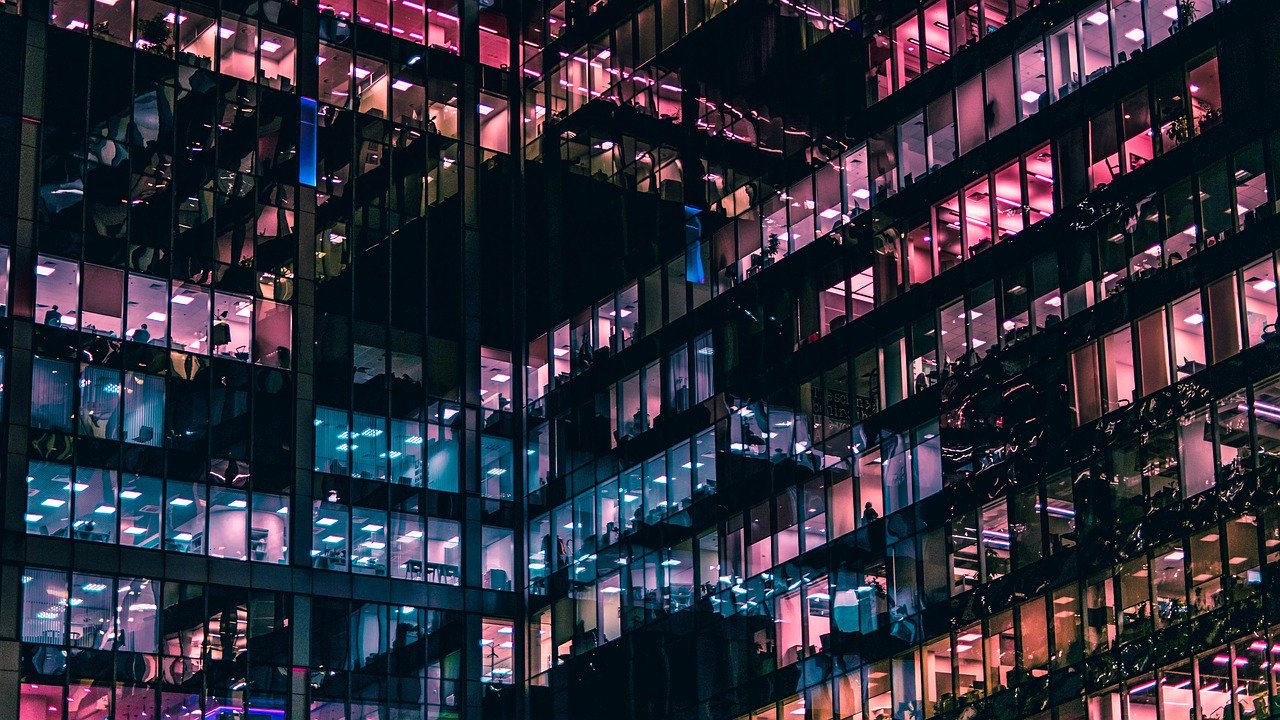 My colleague Elizabeth Thorne and I have been working on busting–or confirming–WAN pricing myths that we’ve heard in the wild. Last time I took on MPLS and DIA price convergence.

I’m going to stick with DIA for this post, too.

Specifically, I want to know if Tier 1 IP providers charge more for DIA service than others. This is a myth I’ve actually argued in favor of in the past. It is certainly true that some carriers can provide a higher level of service, i.e. traffic that takes the fewest hops between destinations, and maybe even traffic that never touches another provider’s network. This might warrant higher prices.

Would enterprises be willing to pay more for DIA from a Tier 1 provider? At least some WAN managers I have spoken with say they would.

Putting one’s crucial traffic out there on the wilds of the internet (instead of on an MPLS WAN/intranet) might be a scary proposition for many. Knowing that this traffic stays mostly/entirely on a single provider’s network might well provide peace of mind that is worth the extra coin.

“If you’re gonna remove MPLS... if you keep [your traffic] in a Tier 1 private network you never cross internet peering points. So their DIA performs as well or better than MPLS networks."

Don’t take it from me, here is a direct quote from the WAN manager of a major biosciences firm we interviewed for our WAN Manager Survey. “If you’re gonna remove MPLS... if you keep [your traffic] in a Tier 1 private network you never cross internet peering points. So their DIA performs as well or better than MPLS networks. The idea that you can go buy DIA or broadband from anyone...I’m not sure. Maybe if you’re [redacted large retailer]. We needed a Tier 1 provider like [redacted carrier] to have the traffic on their own network.”

Side note, if you will indulge me. We’re currently updating this survey and if you’re a WAN/IT infrastructure manager who participates, you will get full access to the final results, including insightful interview quotes like this one. It only takes a few minutes. (There’s also a gift card on the line, folks!)

The first step in evaluating this myth is to figure out what counts as a Tier 1 provider. A common definition in the IP world is something along the lines of  “networks [that] can exchange traffic with other Tier 1 networks without having to pay any fees for the exchange of traffic in either direction.”

We have some additional metrics at TeleGeography in our Global Internet Geography database based on the number of autonomous systems connected, the number of IP addresses connected to its network, and other measurable factors. All of these definitions, however, are more focused on the wholesale IP backbone market rather than providing DIA to corporations outside the telecom industry that generally do not have their own ASN.

So instead I chose a perhaps less technical but more directly applicable method based on our rankings in the Cloud and WAN Infrastructure database. There, we rank carriers by the number of cities in which they have DIA-enabled PoPs among 165 key business centers and all possible global metros. 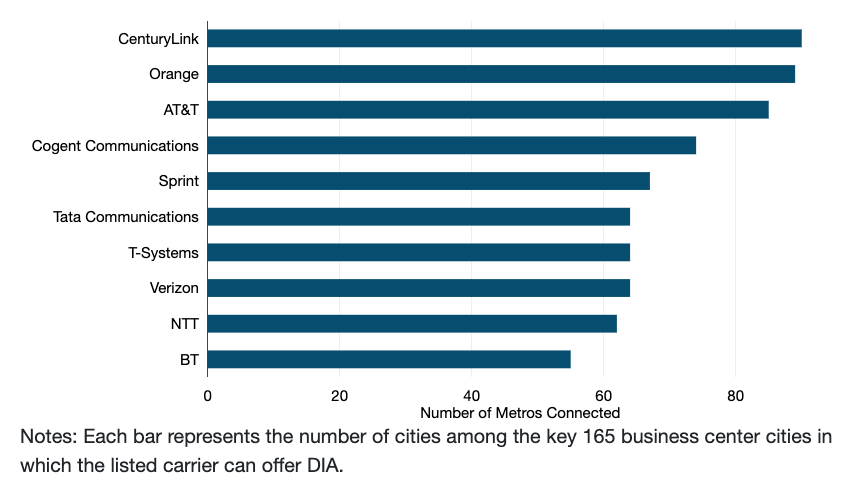 Top DIA Providers in All Metros, 2019 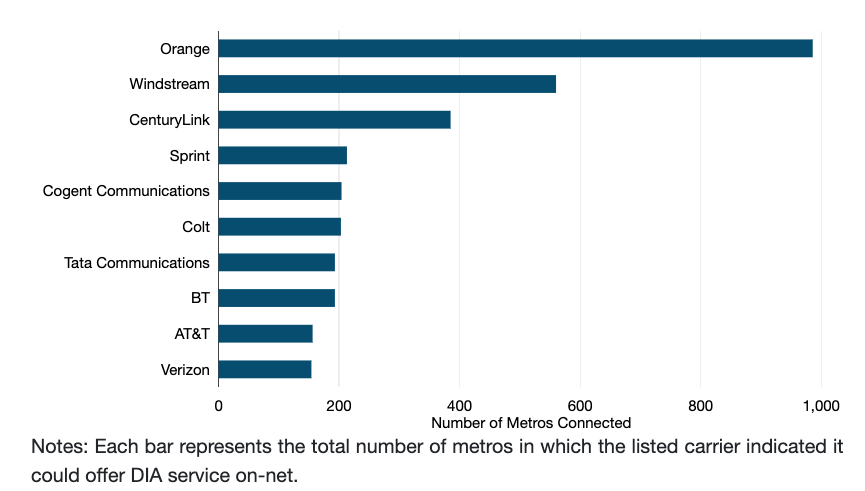 I used these top 10 lists when segregating our prices in the analysis below.

To dig into the analysis I first tagged each carrier that provided a price in Q1 2020 as either Tier 1 or Tier 2. This left me with seven providers in the Tier 1 group and 10 providers in the Tier 2 cohort. (Please note that our pricing data is strictly anonymous, so I cannot indicate which of the top 10 providers from either list are included in this round of pricing data, nor associate any particular price point with a specific carrier.)

Next, I simply found all the city-committed data rate (CDR) combinations for which we had data from both Tier 1 and Tier 2 providers. Then took an average of those prices across all carriers from either group. Finally, I compared the difference between the Tier 1 group average for that city/CDR combo and the Tier 2 group average.

That generates a mixed bag as you can see in this chart.

For most CDRs, Tier 2 provider average prices are indeed a discount—sometimes a significant one. Computing a global average of course introduces a lot of uncertainty, so I drilled down by region. 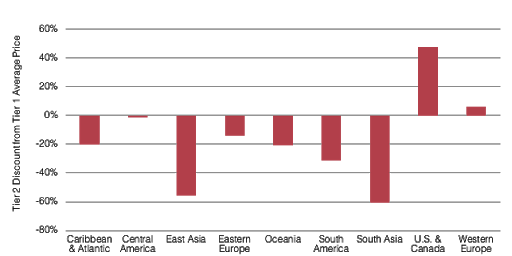 Here we see, averaged across all CDRs, Tier 2 providers are consistently a discount over Tier 1 providers with the notable exception of the U.S. & Canada, and to a lesser extent Western Europe.

I decided to take a look specifically at the U.S. & Canada and Western Europe to see if I could figure out what was up.

The U.S. & Canada data seemed to be all over the place with some CDRs at a discount for Tier 2 providers and others at a premium over Tier 1 provider pricing.

The Western European chart did not help with any additional insights, unfortunately. This started looking like a data sampling issue so I decided to go down a level of granularity and look at individual carriers in specific cities.

I first pulled the data for New York City as the key metro for the U.S. for the common DIA CDR of 100 Mbps. Here we see individual carrier prices broken out by carrier Tier. 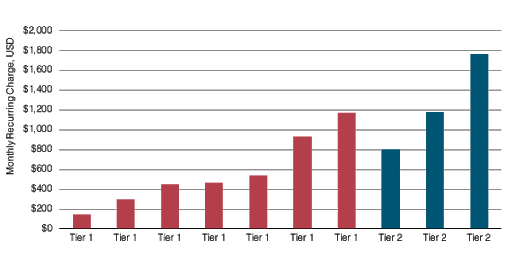 London didn’t add credence to this myth, again with no clear pattern of difference across provider type. 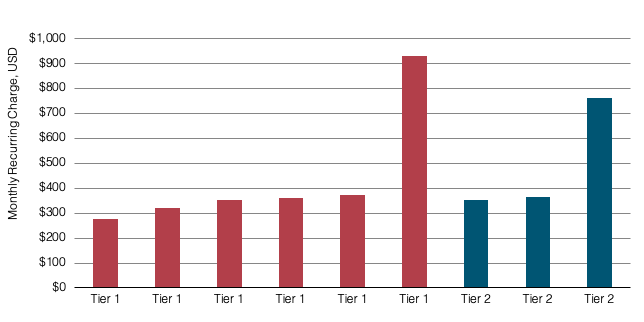 Next I checked some key markets elsewhere in the world including East and South Asia where the global and regional averages had been much closer to supporting the myth. 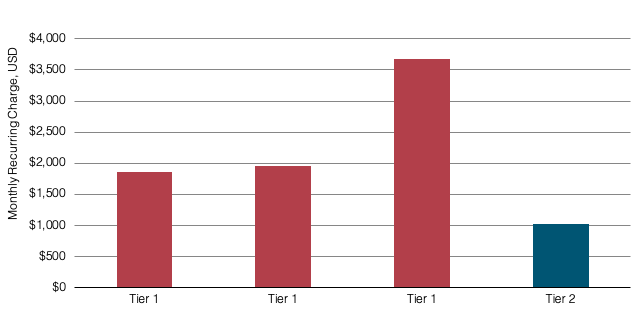 Here there is a clear discount for Tier 2 service, however, it’s from a single provider. The same held true in Singapore (and many other cities I checked). 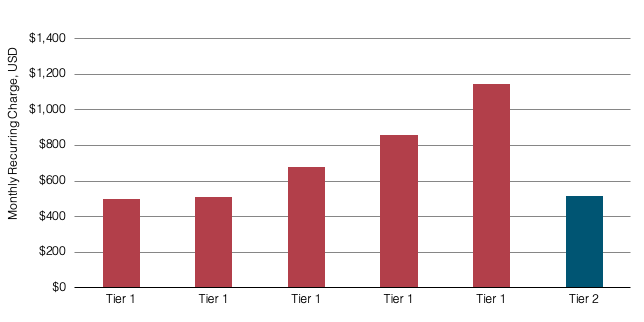 Carriers are often cheapest in their home markets and more expensive elsewhere in the world.

In the U.S. & Canada and Western European cities, the Tier 1 providers are generally U.S. and European providers. The Tier 2 providers are possibly out of region—perhaps Asian or Latin American carriers.

This got me thinking that perhaps my Tier 1 definition had been too broad. In most cities I checked, the majority of prices came from Tier 1 providers even though the majority of carriers included in our dataset are Tier 2.

The Tier 1 providers were almost all from the U.S. & Canada and Western Europe. Within those markets, their pricing represents a large range. Elsewhere in the world these carriers were more likely to provide a price for global business centers and these prices appeared to be at a premium compared to the local Tier 2 providers–usually one or two per city.

Changing Our Tier 1 and 2 Definitions

So I went back and restricted the Tier 1 providers to only those in the top five—not the top 10—on our lists. I also cross-referenced the other metrics we had. I ended up with four Tier 1 providers in our dataset and 13 Tier 2 carriers. Next I took a look at a bunch of those same cities to see what changed. 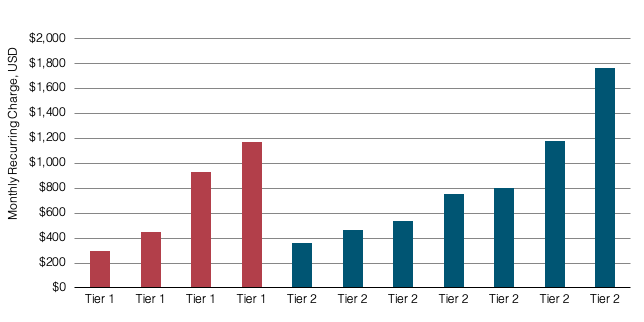 This really didn’t help the myth in New York City. Sure, two of the Tier 1 providers are higher priced than at least a most of the Tier 2 providers, but the lowest price comes from one of the top five global DIA providers. 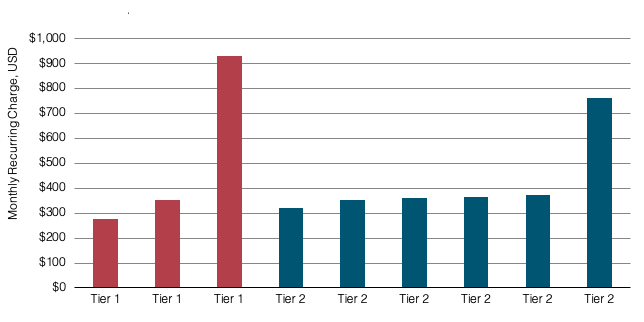 Pretty much the same story in London. In other markets this change made the story more muddled than anything. For example, counting the smaller global providers as Tier 2 in Singapore erased the Tier 2 discount, but still didn’t show a very consistent pattern. 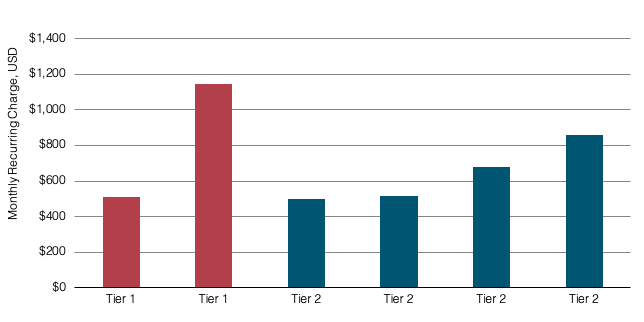 DIA as a Carrier-Grade Service

In both our Cloud and WAN Infrastructure data and our Pricing Suite data, we are focused on telcos and traditional enterprise services providers. I think that colors the results here.

Our DIA data set contains prices exclusively from facilities-based telcos and MSOs that own their own network. While it's true that ISPs around the world might offer DIA in some cases, we are careful to collect pricing data only on enterprise-grade service that comes with industry standard SLAs, is always uncontended, and is aimed at enterprise customers with an international network and traffic. We never include domestic-only providers in these data. This no doubt leaves out more local ISPs (which we could capture in our broadband data, but not in DIA).

The local carriers we include in this dataset are still multinational regional providers. If we included “DIA” service from domestic or even local ISPs, I have no doubt there would be quite a spread between them and Tier 1 global providers.

So, is the Myth Busted or Not?

Having said all that, I think the ultimate answer is that this myth is a mixed bag.

Yes, the one or two more local providers (still a regional carrier) are likely cheaper for DIA, which partially confirms the myth. However, the majority of corporate sites are in the U.S. & Canada or Western Europe. In those regions, since the global providers are also the local ones, we see no discernible gap between Tier 2 and Tier 1 providers, so the myth is also busted.

DIA, as a service from a multinational facilities-based carrier, is simply more likely to be offered by a provider with a global reach. Yes, the one or two more local providers (still a regional carrier) are likely cheaper for DIA, which partially confirms the myth. However, the majority of corporate sites are in the U.S. & Canada or Western Europe. In those regions, since the global providers are also the local ones, we see no discernible gap between Tier 2 and Tier 1 providers, so the myth is also busted.

Either way, it seems that status as a Tier 1 provider, even though it offers broad geographic coverage and greater scope to carry traffic on-net, may not be a keystone for individual carrier pricing, at least in a globally consistent way.