We get lots of questions about submarine cables.

Where are they? Who owns them? What happens when they break?

1. There is No Bandwidth Glut

Many investors have long memories. They recall not-so-fondly how a glut of bandwidth was partially responsible for the telecom market bust of the early 2000s.

Bandwidth glut remains a talking point among investors due to a misunderstanding of the difference between lit and potential capacity on submarine cables (the amount of capacity a cable is equipped to handle at present vs. how much it could accommodate if it were fully equipped).

In recent years, the lit share of potential capacity has been less than 30 percent on major routes.

Percentage of Potential Capacity that is Lit on Major Submarine Cable Routes, 2013-2017 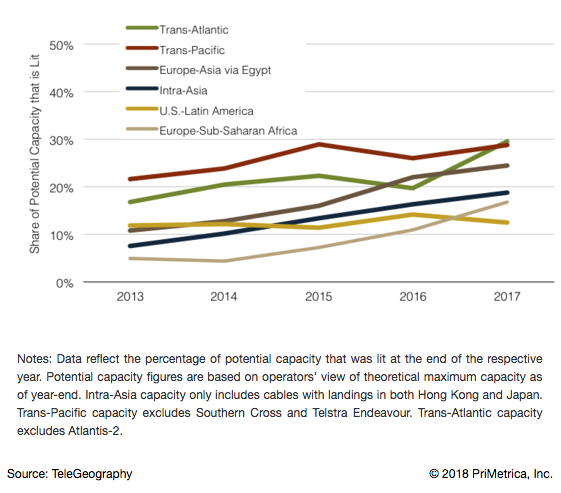 The reason unlit capacity does not represent a glut or oversupply of capacity is that it is only theoretical supply. It’s only available for sale once a cable operator invests additional CapEx.

Lit capacity is the metric that matters most when assessing current supply in the market, not potential capacity. Cable operators have closely aligned their lit capacity with purchased volumes and only add new lit capacity when demand warrants the cost of doing so.

(Related: anyone eager to understand how current submarine cable market conditions truly compare to what happened in the early 2000's should check out my colleague Tim Stronge’s presentation Submarine Cables: Are We in a New Bubble?)

2. Capacity Prices Will Not Stop Falling

This is a big one worthy of its own post, but I'll give you the gist. Investors often ask why capacity prices continue to fall when demand for bandwidth remains robust.

This is certainly confusing, since anyone familiar with basic economic theory knows that as demand increases, prices also generally increase. Submarine cables are unusual because they cost a lot to deploy but offer enormous economies of scale once capacity ramps up. As demand rises, a cable operator sells more capacity on its cable, reducing the cable's underlying unit costs. Consider two similar cables. One cable with 2 Tbps sold would have 50 percent lower unit costs than one with 1 Tbps sold.

Additionally, while it’s true that adding new supply requires additional CapEx, the unit cost of adding capacity is declining over time. For example, the cost of adding 1 Tbps to a cable in 2018 may be half what it was a few years ago. Since most submarine cable routes are competitive, unit cost reductions are passed along to customers in the form of lower prices.

I’m not suggesting there is no limit to how low prices can fall. A cost floor does exist; however, this floor is shifting lower as supply expands.

3. New Cable Investment Occurs For Many Reasons Unrelated to Lack of Supply

Some investors are skeptical of the $8.7 billion in investments put into new cables between 2018 and 2020, given ever-declining price levels and the availability of unlit capacity on existing cables. While the dwindling capacity on a cable may be a fundamental reason someone would want to build a fancy new high-capacity cable, it’s far from the only one.

Some other reasons for new cable investment include: