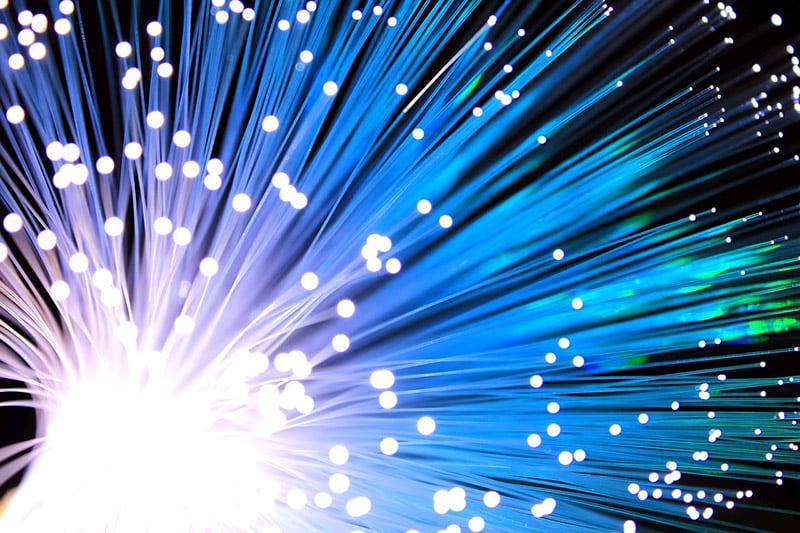 Picking Your Provider: How Carrier Selection Affects Your WAN Costs

My grandfather told stories about his days as a milkman in the 50s. To a kid growing up 30 years later, the concept seemed pretty weird. Why would someone drive to your house with your milk instead of you picking it up at the grocery store with the other food?

In 2019—unless you're a hipster in Brooklyn—you might pick up your milk from a from a big box wholesaler where you also get your new TV or patio set. Over the past 50 years, retailers have taken advantage of technological advancements (like cheap refrigeration) to cram anything you can load into an SUV under one roof. This way, retailers achieve much better economies of scale and can offer consumers those low low prices!

We all know this story. What does it have to do with networks?

Well, the economics of global telecom networks are the exact opposite. A one-stop-shop WAN provider has something more like diseconomies of scale. It needs more network operations centers, a bigger international sourcing team, more boots on the ground, more colocation space, and more physical network to sell the same WAN service, like MPLS.

This leads to a higher unit cost, or price per Mbps.

Despite these higher prices, enterprise customers with global footprints have long had reasons to select a global network supplier. Among them: 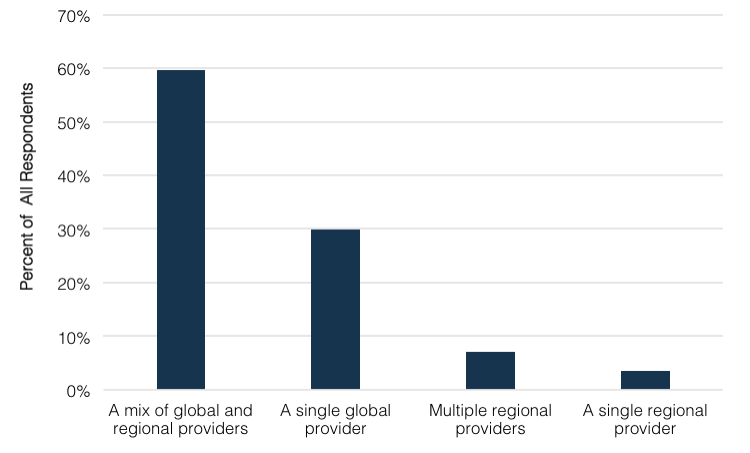 Historically, most of our WAN Cost Benchmark customers have used a primary global network provider for network services. However, our 2018 WAN Manager Survey results show that only 30% of respondents primarily source their WAN network from a single global provider. A clear majority now source from a mix of global and regional carriers.

This shift prompted me to look closer at carrier choice and why WAN managers might give up the simplicity of using a single primary carrier.

You might expect that enterprises are shifting away from global carriers to piece together regional MPLS networks from local providers. I've talked to WAN managers who've done just that; they indicated their goal was to lower their WAN costs.

And I think it’s likely this would work. How do I know? I created a hypothetical network to test various WAN hypothesis based on the median TeleGeography benchmark customer.

The original MPLS hypothetical network structure could take up an entire blog post on its own, but briefly, it includes: 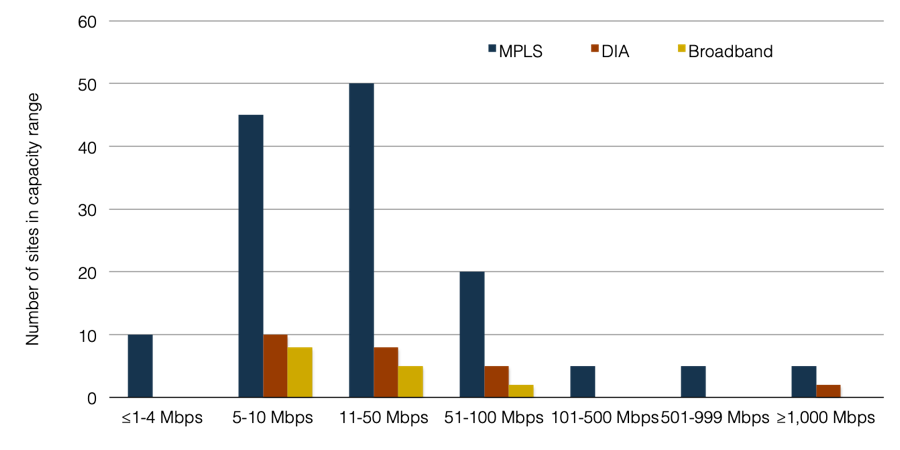 When I open the hypothetical network in TeleGeography's benchmarking tool and set the original MPLS network to include only global providers for the MPLS and DIA ports, we get a median annual total cost of ownership (TCO) of $6,351,444. If I keep the network exactly the same, but simply change the MPLS providers to “regional,” the TCO goes down to $5,889,432. 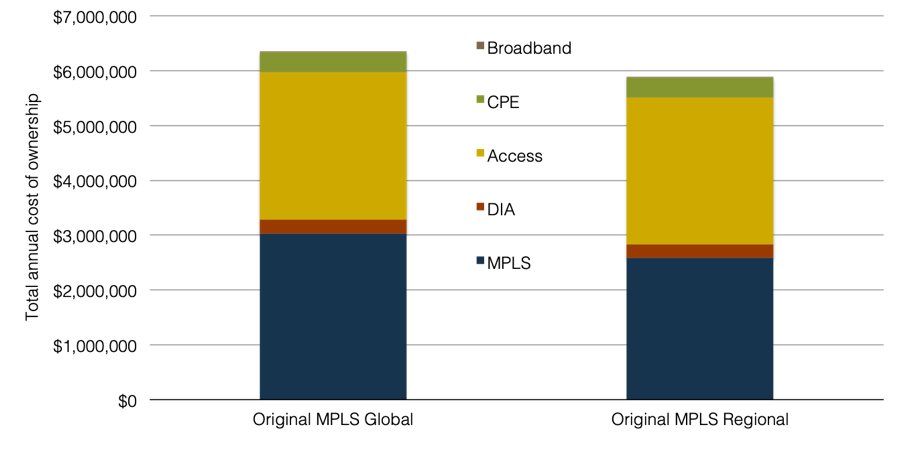 So, yes, after switching to regional providers the TCO went down, but only by 7%. This level of savings might barely cover possible additional overhead costs of managing multiple providers.

It’s not surprising, then, that fewer than 10% of WAN managers we surveyed said they're using “multiple regional providers.” Instead, they might be using a mix of global and regional providers for a host of reasons. Perhaps because:

Our original MPLS hypothetical network includes only 25 sites with DIA. In fact, because of the move to local internet breakouts in hybrid WANs, we're now more likely to see networks that have DIA at almost every site. But this is still not typical.

Why are WAN managers shifting to local internet breakouts?

There are many technical reasons—often driven by the move to SaaS apps—but a key one gleaned from our survey is that managers need more bandwidth and cannot afford to do that with additional MPLS capacity. SaaS apps often work fine over the internet, so it makes sense to send IP traffic over DIA (or broadband) rather than increasing MPLS port sizes.

I doubt I need to tell anyone reading this that DIA can be noticeably cheaper than MPLS.

We're talking specifically about carrier choice. To test provider choice in DIA implementation, I created a hybrid MPLS and DIA WAN to load into our benchmarking tool. This network significantly boosts average total site capacity from 125 Mbps in the original MPLS to 241 Mbps.

Basically, we lowered some MPLS ports sizes and added in a DIA port to generally match or exceed the size of the original MPLS port.

There is still MPLS at 140 sites and broadband at 15, but now 136 sites with DIA. Both the DIA and MPLS port sizes are pretty heavily weighted toward the lower end of capacity ranges. But the total bandwidth available per site nearly doubles.

Hypothetical Network 2: Hybrid MPLS and DIA WAN
Number of Sites in Each Bandwidth Range by Product in MPLS-DIA Hybrid WAN 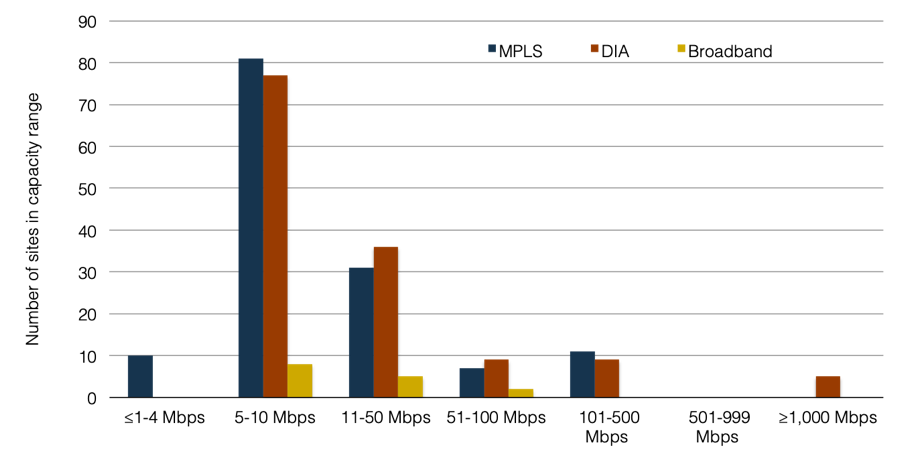 A key feature of this hypothetical scenario is that it assumes the traditional telco model, where DIA is sold as a port service connected by a local loop with an additional charge. So this network assumes that you're getting DIA from a carrier with a loop.

In the first scenario I set the MPLS and DIA providers both to “global” and we get a TCO of $9,061,980. In the second, I kept the MPLS provider at global, and set the DIA provider to “all,” which will find the median price in each location based on whoever offers DIA service there, whether global or regional. The result is a TCO of $9,022,380, which is only about $40,000 cheaper. 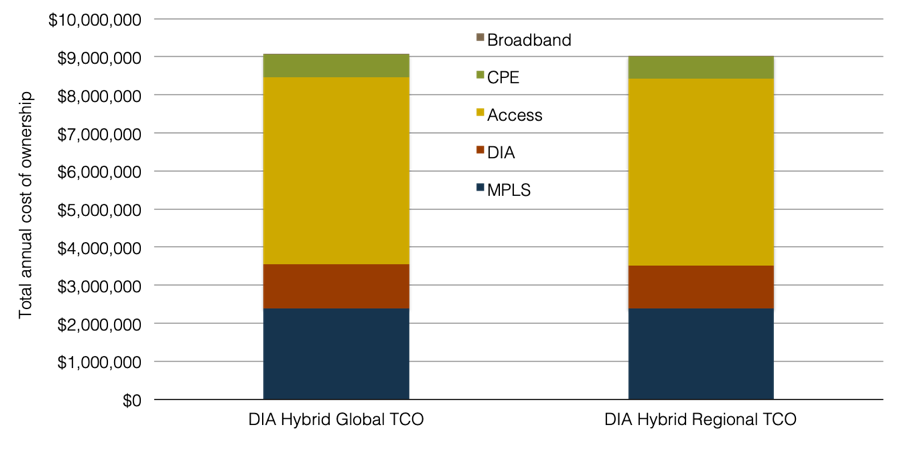 From this it seems cost isn’t a primary motivator for a mix of global and regional carriers in such a scenario. However, like I said above, this hypo assumed that the telcos (even the regional ones) were sourcing a local loop to connect to a DIA port. Increasingly competitive carriers, ISPs, and even some incumbent providers offer “on-net DIA” from the customer site without an additional loop fee.

In practice, the cost of this on-net DIA is basically the same as just the port charge in the old model.

To test this, we have yet another hypothetical network. Our MPLS-on-Net-DIA hybrid WAN is exactly the same configuration as the previous two, but it removes the local loop charge for all non-African sites in the 0-5 km and 6-15 km distance bands. More remote sites and those in Africa—where on-net DIA is rarer—are assumed to require a local loop. 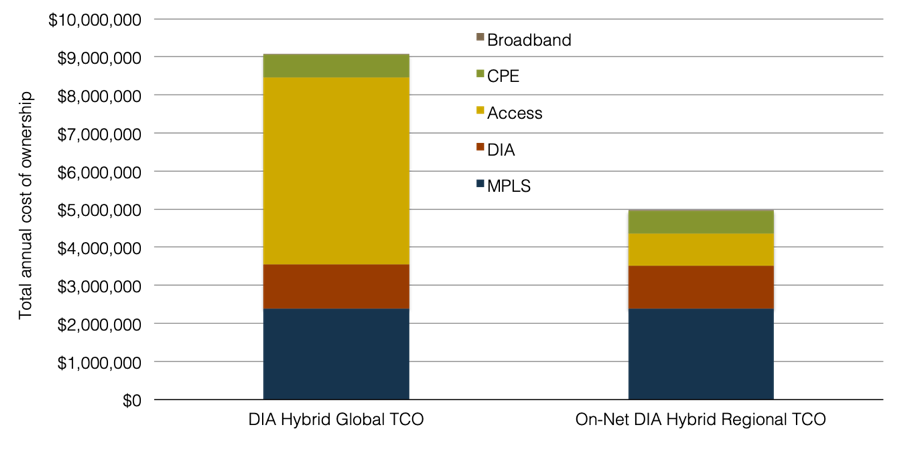 This network is using a global telco for MPLS, but sourcing DIA from competitive carriers or ISPs that do not charge extra for loops to sell DIA at buildings they have PoP’d.

This has quite an effect on the TCO. The on-net TCO drops from just over $9 million in the all-global-loop+DIA-port network down to $4,961,028 for the mostly on-net DIA from regional and smaller providers network. This is a decrease of 45%. Keep in mind, this is also 22% cheaper than the original global MPLS network that offered about half as much bandwidth per site. This sourcing mix is really starting to make sense!

The key takeaways before I leave you: