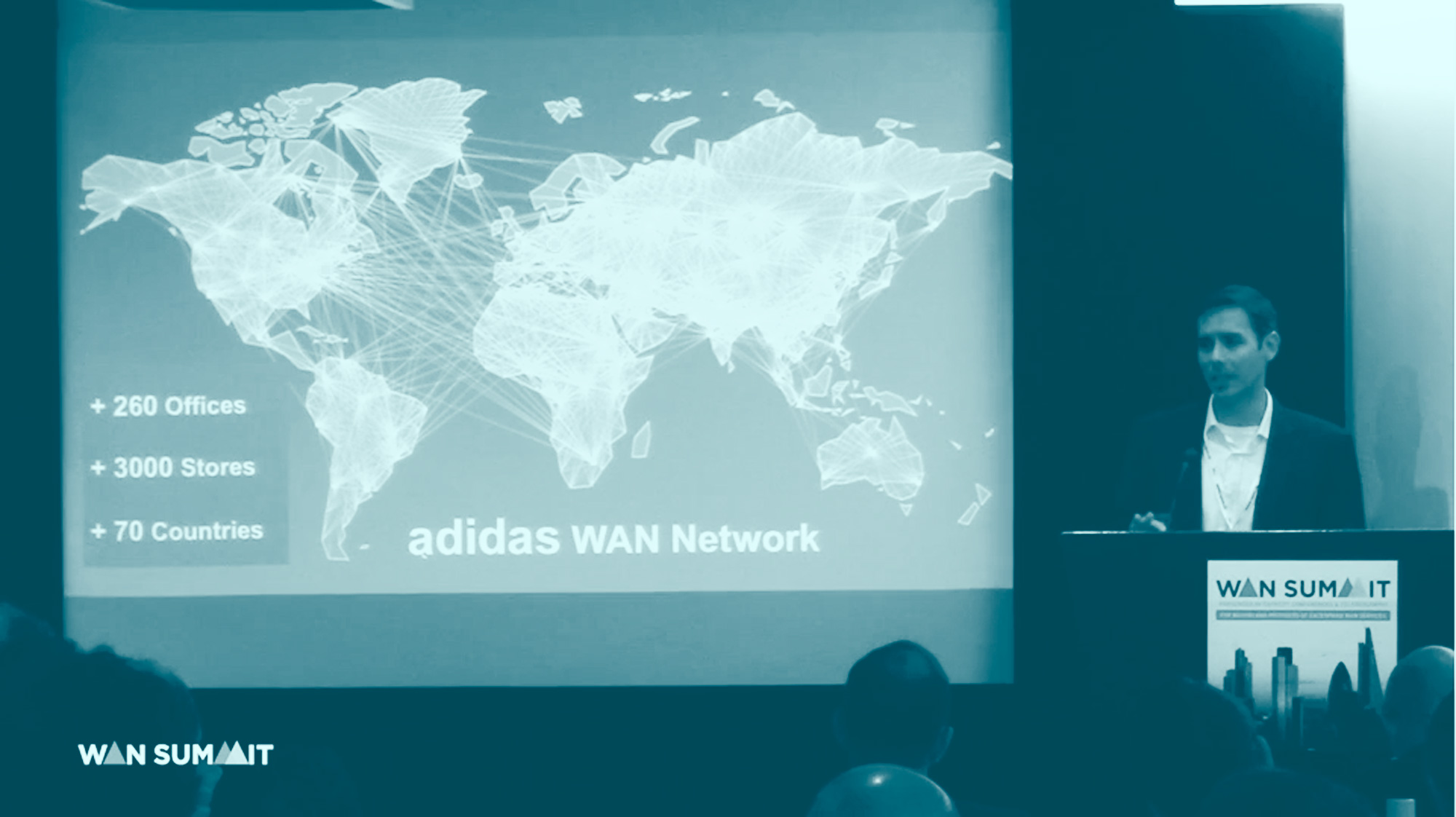 How WAN Offloading Offset the Cost of Traffic Growth at Adidas

At this year’s WAN Summit in London, Senior Director of Global IT at Adidas, Alberto Pedraz, set out a precise and concrete user case which illustrated some of the drivers, implementation decisions and success factors of the €14.5bn turnover sports apparel company’s 18-month WAN offloading project.

In this presentation, Alberto explained:

Alberto began by stressing that Adidas is not an IT organisation, so many of the new developments talked about during the WAN conference have presented real challenges to Adidas in terms of how to implement them.

It is also important to understand that Adidas is a consumer business, Alberto said; “In the consumer world there is a lot of change and a lot of that change is around IT. The move to digital is presenting a lot of challenges for organizations and network departments.”

The business picture was further complicated because of the challenges peculiar to a fast-moving retail channel. The pressures to open new stores and close stores means that service delivery lead times are critical, since they will have a direct impact on profit. Alberto said this means in a retail world it is not possible to go with a single supplier; a centralized MPLS business-wide was not commercially feasible or desirable.

However, like many businesses, increasing data growth and the resulting cost pressures meant that Adidas needed to look for ways to better manage that data growth.

Data growth was being driven by:

“Achieving the right balance between cost – investment – performance is the day-to-day challenge for my team,” said Alberto.

Traditionally, methods to optimize costs have focused on:

“We have a huge deployment of WAN accelerators,” explained Alberto, “and the comparison ratios we are getting for our important applications are pretty significant. We’re talking 80%. This was achieved with a lot of headaches and a lot of effort from an engineering perspective, as you can imagine.”

Nevertheless, Alberto wanted to explore new options to optimize costs. When he looked at their Mb/sec costs of traffic over the MPLS and via ISP, he found that local internet was nine times cheaper: “Based on our experience there was a huge difference,” he commented.

First, Adidas made the hard decision to go into a full decentralized Internet concept. Then, second, they had to use this new infrastructure to offload part of the traffic.

“Before WAN offloading, in many locations, internet traffic was going from remote office to regional head office and from there, accessing the internet – so we were overspending on the resources of the expensive MPLS network,” Alberto explained.

This represented a key element of traffic that should be offloaded. Other offloaded traffic included:

Alberto explained: “Smartphone updates are high volume and on a global scale this was really painful for us, so it makes sense to offload this traffic.”

He also recognized that offloading video traffic is controversial.

The Inexorable Move to Mobile

“Most of the arguments for keeping MPLS relate to real-time traffic and how MPLS protects performance. But I don’t really think the argument of QoS is solid,” he said. “In my experience, especially in the retail sector, we’re competing with the fact that employees are already using their Smartphones to connect with Skype or other tools like it to collaborate with people and perform their jobs. They are already using wireless networks to communicate with people, stream multi-media, FaceTime and all that. It’s here.”

He gave a concrete example of how these day-to-day realities have impacted strategy: “I stopped investment in room-based video conferencing solutions. Every investment we make from now on is going to go to mobile and only mobile because I am convinced that the new way of working is going to go mobile sooner or later.”

The project has not resulted in savings, rather maintained expenditure in the face of increasing data traffic and new retail locations coming on stream all the time.

Alberto said: “Because of the increase in traffic, and in a company that is growing, this project is all about cost avoidance. For us, the cost avoidance was 35%.”

Alberto listed the key success factors for this project at Adidas as:

Discover the detail: Watch Alberto’s presentation at the WAN Summit London 2015 in full.