The Italian government recently completed its sale of wireless spectrum, which has been earmarked as suitable for future 5G services.

The auction ran for 14 days and saw 171 rounds of bidding, raising over €6.55 billion. This was more than €4 billion higher than the government’s minimum target.

But the high prices paid for frequencies have raised eyebrows—and not just in Italy.

Two blocks of 80MHz and two of 20MHz were sold in the 3.7GHz band, with a spectrum cap of 100MHz per operator.

In the 700MHz band, six paired 5MHz blocks were on offer, with two paired blocks (2×10MHz) reserved for a new entrant.

The 26GHz spectrum was split into five lots of 200MHz.

Licenses are valid until 2037, although the 700MHz frequencies won’t be opened until July 2022.

At the start of bidding in September, only the four cellcos and Fastweb remained as auction participants.

TIM was the highest bidder, offering a total of €2.41 billion for 700MHz, 3.7GHz, and 26GHz spectrum, while Vodafone submitted a bid of €2.40 billion for frequencies in the same three bands.

French-owned Iliad—which launched in Italy in May, qualifying as a new entrant in the 700MHz sale—paid €1.19 billion for a much smaller block of spectrum in the 3.7GHz range, as well as 700MHz and 26GHz licenses.

Wind Tre, which is a subsidiary of CK Hutchison of Hong Kong, missed out on 700MHz frequencies, paying €516.5 million for 3.7GHz and 26GHz spectrum.

Finally, Fastweb offered €32.6 million for one block of 26GHz spectrum. The ISP is likely to use the frequencies to offer a fixed-wireless home broadband service rather than a true mobile offering like the other bidders.

Licenses in the 3.7GHz band were the most sought after, attracting combined bids of €4.35 billion. The 700MHz auction brought in €2.04 billion and the 26GHz frequencies raised €163.7 million.

The Italian government has received criticism for the way it set up the auction. The government offered two larger blocks of spectrum in the 3.7GHz band along with two smaller packets, which pitted operator against operator in a fight for the bigger blocks.

The intense competition meant that bidders in the Italian 3.7GHz sale paid around $0.42 per MHz per head of population (per MHz pop), which is well above what was raised in other countries.

In Finland it was around one-tenth of what was fetched in Italy. In fact, during the Finnish auction of three 130MHz blocks of spectrum earlier in October, Telia emerged as the biggest spender, having bid just €30.3 million, while Elisa agreed to pay €26.3 million and DNA rounded out the winners with a €21.0 million offer. Much lower price points, all around. 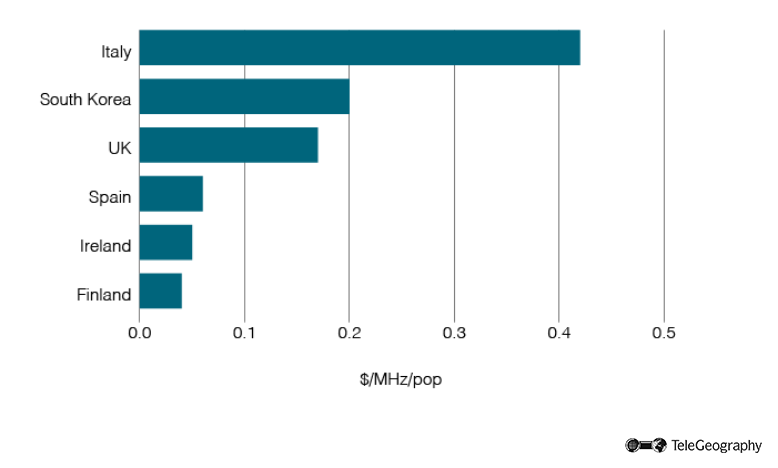 While the Italian government’s strategy has provided a welcome boost to state coffers, there are fears that local operators will now be forced to either cut their planned 5G investments or charge higher prices to end users to recoup their outlay on spectrum.

One very vocal critic of the Italian government’s approach has been Nick Read, the newly-installed CEO of U.K.-based Vodafone Group. Said Read, “Auctions should be designed to balance fiscal requirements with the need for investment to enable economic development…it is critical that European governments avoid artificial auction constructs which fail to strike a healthy balance for the industry.”

“Auctions should be designed to balance fiscal requirements with the need for investment to enable economic development…it is critical that European governments avoid artificial auction constructs which fail to strike a healthy balance for the industry.”

Meanwhile, there are worries that Wind Tre will struggle to compete with long-standing rivals TIM and Vodafone without access to a larger block of 3.7MHz spectrum. And Iliad finds itself with a sizable license fee to pay when it’s still trying to find its feet in the Italian communications sector.