WAN Service and Pricing Trends for 2020

The world of WAN services can seem like the Wild West to even the savviest of WAN managers. We try to bring some order to this world with our Cloud and WAN Infrastructure research service.

Our analysis examines the evolution of WAN services and architecture, geographic coverage, and pricing of these services. We also cover cloud connectivity services (dedicated connections) with profiles and analyses of the major public IaaS cloud service providers and colocation providers that offer cloud on-ramp services.

Today we're sharing WAN service and pricing trends from our latest update of Cloud and WAN Infrastructure, all based on carrier survey data collected in Q4 2019.

Layer 3 MPLS IP VPN is a mature network service for most providers and is by far the most widely available international enterprise network service. IP VPN services remain the workhorse of the global WAN, despite the fact that a growing number of enterprises are diverting some corporate traffic to the public internet.

Company profiles indicate that all 173 providers that we reviewed offer MPLS IP VPN. Geographic availability is crucial in choosing an IP VPN provider, but customers must also navigate the array of service features and product differences across carriers.

DIA delivers a private, business-grade on-ramp to the public internet—great for supporting access to web-based applications and online content.

We've noticed that enterprise customers are beginning to add bandwidth in the form of DIA (and even business broadband) in lieu of more expensive MPLS bandwidth. DIA is well-suited for many enterprises as they take advantage of cloud applications designed to perform well over the public internet.

For many enterprises, Layer 3 MPLS IP VPNs are ideal because routing and management is outsourced to the service provider. However, Layer 2 Ethernet VPN (EVPN) may be preferable for enterprises that want to retain full control of their network configuration and IP routing, and have the in-house expertise to manage it.

The service is often considered to connect sites such as headquarters and data centers in any-to-any architectures, particularly where class of service prioritization is useful, and at higher capacities where the cost per Mbps may be attractive.

Network prices are different across the world, but they're also constantly changing—and often at different rates depending on geography and bandwidth.

The good news for buyers is that for the decade-plus we have been tracking WAN prices they have only moved in one direction: downward. This is due to a lot of factors, many related to increasing supply from technological advancements in transport and long haul fiber builds that stay ahead of capacity demand increases. So the question is not “Will the price drop?” but rather “How much will prices decline and how does this vary across my footprint, capacity mix, and product mix?”

We have long used a three-year compound annual growth rate to review price changes, in part because it is the length of most MPLS WAN contracts. Over the life of your contract you should expect your combined MPLS VPN plus access prices to fall between 10% and 30% each year. Note that here instead of a CoS mix and access, we're just looking at base best-efforts MPLS prices.

Some takeaways from our analysis: 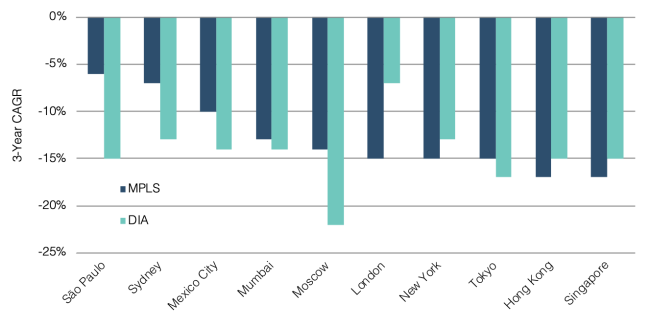 Note: Each bar represents the three year compound annual growth rate in median MRC for a 20 Mbps MPLS port and DIA port at the listed city from Q3 2016 through Q3 2019.

As MPLS VPN and DIA are often pitted against each other in the hybrid WAN revolution, it's important to note that at the geographic level, MPLS and DIA trends can vary significantly. Key things we're seeing: