The government of Hong Kong has completed a round of 5G spectrum auctions, having sold frequencies in the 3.3GHz, 3.5GHz, 4.9GHz, and 26GHz ranges this year. The sales raised a total of HK$1.91 billion ($244 million) in spectrum utilization fees (SUFs).

The territory is looking to be among the front-runners in the race to launch 5G networks in the Asia-Pacific region.

Elsewhere in the region, two cellcos in Australia and all three operators in mainland China have launched commercial 5G networks in recent months. Most live networks currently use 3.5GHz spectrum, although the 4.9GHz band is also being employed in China.

With licenses now allocated in Hong Kong, the first 5G-capable spectrum will be released in December 2019, with the rest to follow by April next year.

With licenses now allocated in Hong Kong, the first 5G-capable spectrum will be released in December 2019, with the rest to follow by April next year. This means that local wireless operators will be expecting to join the 5G market in the first half of 2020.

Hong Kong is home to four mobile network operators: HKT, Hutchison 3, China Mobile Hong Kong (CMHK), and SmarTone. Between them, they served 13.98 million customers at the end of June 2019—excluding M2M connections—which is up from 13.70 million a year earlier. And 4G services have proven to be popular, with an estimated 82% of the market using LTE technology. 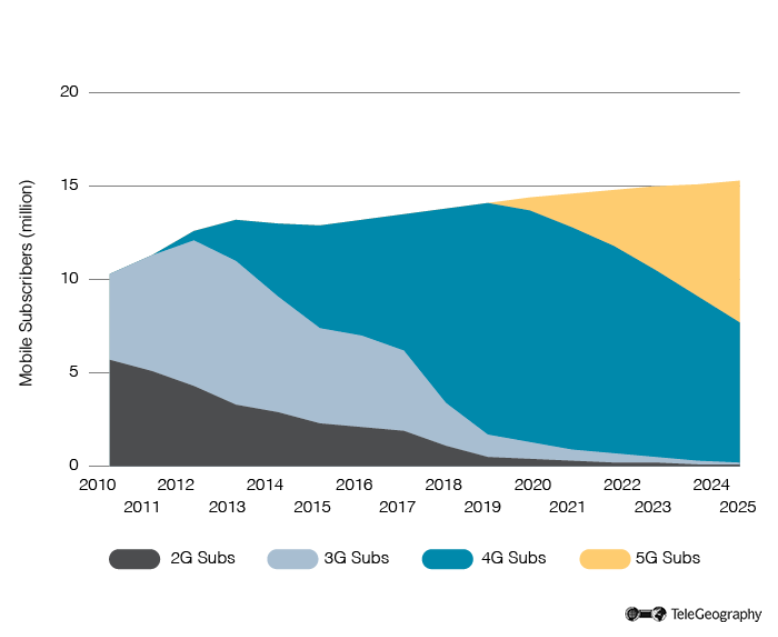 Additionally, licenses covering the 700MHz band will be made available in 2020.

The first 5G spectrum award process took place in March 2019 when frequencies in the 26GHz-28GHz range were on offer. Due to the wide availability of free spectrum in this band, licenses were allocated via application rather than competitive auction. No SUFs were charged.

Three of the four incumbents acquired 400MHz of frequencies each. Hutchison was the only firm that didn’t participate.

Three of the four incumbents acquired 400MHz of frequencies each. Hutchison was the only firm that didn’t participate. It declined to take part in the awards, saying that there would be sufficient spectrum available for 5G services in the lower bands, while the higher range frequencies are also not suitable for providing indoor coverage.

The next spectrum up for grabs was in the 3.5GHz band. This proved to be the biggest earner for the government. All four cellcos took part, bidding a combined HK$1.006 billion ($128 million). CMHK paid HK$300 million for 60MHz of spectrum, while HKT and SmarTone offered HK$252 million each for 50MHz. Hutchison 3 won 40MHz with a bid of HK$202 million.

The next spectrum up for grabs was in the 3.5GHz band. This proved to be the biggest earner for the government.

Nine days later the results of the 4.9GHz sale were announced, with CMHK and HKT each taking 40MHz of spectrum. CMHK’s parent company China Mobile is using this band as part of its own 5G rollout on the mainland, so the Hong Kong unit was understandably keen to acquire similar frequencies to facilitate cross-border roaming. Hutchison and SmarTone had opted not to participate.

The final round of concessions went under the hammer in early November, and all four operators came away with 3.3GHz licenses. HKT and Hutchison paid HK$199.5 million for 30MHz blocks, while CMHK and SmarTone offered HK$133 million for 20MHz of frequencies.

Operators have welcomed the decision by authorities to not demand excessive reserve prices on the spectrum, saying they will redirect cash saved toward improving their respective network rollouts.

Following the 3.3GHz sale, HKT said in a statement: “HKT is appreciative of the government’s decision to set more reasonable auction reserve prices and round price increments for the 5G spectrum, which would facilitate the development of the industry and benefit mobile users.”