In house or outsourced? This is an age-old question for many firms.

If you’re a big economics nerd like I am, you may have heard of Ronald Coase or his seminal paper “The Nature of the Firm,” in which the Nobel Prize-winning author asked: “Why do firms hire employees rather than contractors?”

Despite being written before the electronics age, the same costs outlined in that paper 80 years ago—transaction costs, trade secret costs, policy and enforcement costs—still apply to considerations made by IT infrastructure managers when deciding whether to buy SD-WAN (and network) as a managed or unmanaged service.

Thus far in our series (by the way—you’re reading the final entry in our series on benchmarking hypothetical WANs; jump back to the beginning if you want to start from the top) we’ve considered SD-WAN service and pricing to be somewhat monolithic. All of the scenarios we’ve reviewed have included median annual SD-WAN prices representative of DIY or vendor-direct unmanaged SD-WAN.

Our 2018 WAN Manager Survey indicated that a strong plurality of respondents had already or planned to use an SD-WAN vendor direct, so this has been a typical choice for many early adopters. However, particularly as SD-WAN becomes more common in the market, many later-adopting enterprises might select a basic managed or premium managed SD-WAN service from a vendor, carrier, or managed services provider.

What type of vendor do WAN managers plan to use for SD-WAN service?
2018 WAN Manager Survey Type of SD-WAN Vendor Selected/Planned to Select

To collect data on price distinctions in our SD-WAN Research Service pricing surveys, we defined three levels of SD-WAN management:

Naturally, managed services will cost more—but there are a host of costs to consider along the lines of Coase’s famous paper on outsourcing.

So, the cost of the management isn’t simply the cost of the service itself. It’s assessing how it might affect labor costs, security costs, and control over other features and performance metrics.

While our analysis will focus on the cost of the service itself, it’s important to keep in mind that these background factors influence decisions alongside price.

Let’s leave out MPLS for now, as an all-internet WAN focuses attention on the SD-WAN price differences themselves; SD-WAN makes up a larger percentage of the TCO.

For example, unmanaged SD-WAN was 22% of our MPLS core hybrid, while it makes up 56% of the dual broadband hybrid. So a change in SD-WAN price is going to have a larger effect on an all-internet WAN. We started with the on-net DIA-broadband hybrid. (If you missed it, you can check out the bandwidth and product mixes included in all-internet scenarios in this post.) There, unmanaged SD-WAN made up 27% of the total annual cost.

What impact does SD-WAN management have on an all-internet WAN TCO?Original MPLS & On-net DIA Broadband Hybrid WANs with All SD-WAN Annual TCOs

When we plot on-net DIA-broadband hybrids against the original MPLS VPN WAN with all three levels of SD-WAN service, we see significant increases in price for the managed SD-WAN services and savings over the original hypothetical WAN.

When we plot on-net DIA-broadband hybrids against the original MPLS VPN WAN with all three levels of SD-WAN service, we see significant increases in price for the managed SD-WAN services and savings over the original hypothetical WAN.

SD-WAN costs go from about $710,000 to roughly $1.1 million a year for basic managed and about $1.4 million for premium managed. This shifts the savings over the original WAN from 54% for unmanaged to 48% for basic and 42% for premium.

How about for an all-broadband WAN TCO?
Original MPLS & Dual Broadband Hybrid WANs with All SD-WAN Annual TCOs

For dual broadband, the impact on the TCO of the SD-WAN management levels was larger.

When it comes to our largest network in terms of average available capacity, and thus our most expensive SD-WAN network, the SD-WAN component cost for basic managed service was a 41% increase over unmanaged. And the premium managed was an 82% increase. So the management levels are important to the SD-WAN price itself, but still represent huge discounts over MPLS. The premium dual broadband was a 66% discount on the original MPLS WAN.

In those scenarios, customers who keep MPLS—such as MPLS-DIA—could be more sensitive to increases in SD-WAN costs.

We looked at the MPLS-on-net DIA hybrid with no MPLS backups for customers who are less risk tolerant in their approach to SD-WAN-enabled WAN. The unmanaged SD-WAN MPLS-DIA network is a 15% discount over the original MPLS network, the basic managed 5%, and the premium managed network is a 1% decrease—or basically the same price.

However, keep in mind that this represented nearly a doubling of average site capacity from 125 Mbps to 241 Mbps. It’s likely that this seems like a good deal to many enterprises:

Can managed SD-WAN wipe out savings in an MPLS-hybrid WAN TCO?
Original MPLS & MPLS-on-net-DIA hybrid WAN with no Backups with All SD-WAN Annual TCOs 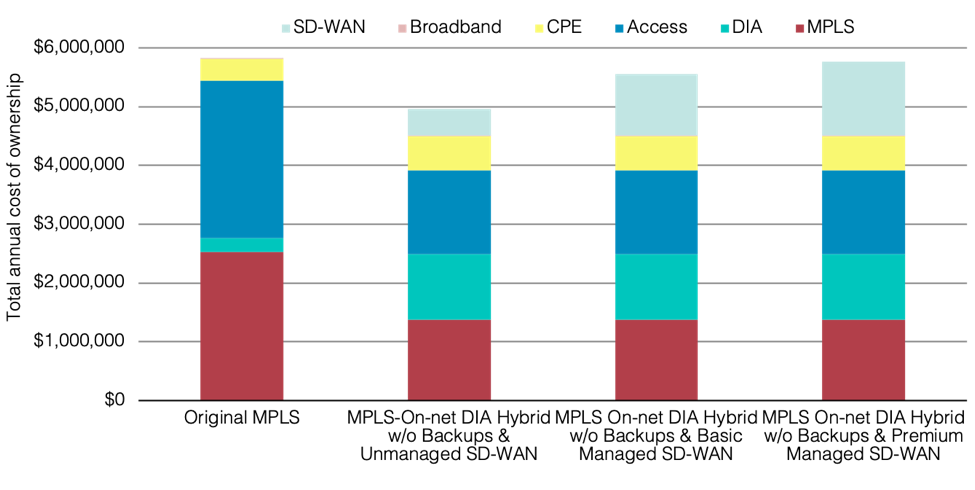 The MPLS-core network was another option for risk-averse enterprises that want to keep the known technology at their key offices. In this version we looked at a more “outsourcing” friendly option where we have MPLS at a dozen or so key offices, and a DIA-broadband hybrid at most branch offices and other sites.

The broadband here was assumed to be sourced from an aggregator, thus double the price of ISP-direct. The result, as above, was a network with an average site capacity of 420 Mbps or 3.5 times the original MPLS network. When we added the managed SD-WANs, we still saw a significant discount for this additional capacity and reliability.

The basic managed version is a 36% discount while the premium option was 31% cheaper than the original MPLS. 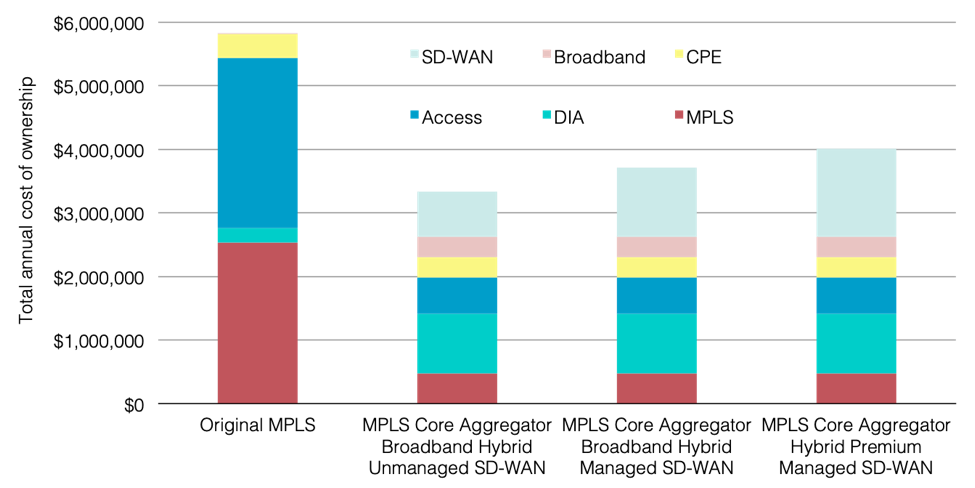 This series of posts has been centered around understanding how moving away from a standard all-MPLS network can change both average site bandwidth availability and total network cost of ownership. Clearly we’re in a time of transition in the WAN space, as both cloud adoption and SD-WAN change the needs and possibilities of WAN sourcing.

Clearly we’re in a time of transition in the WAN space, as both cloud adoption and SD-WAN change the needs and possibilities of WAN sourcing.

We’ve not begun to exhaust all the possibilities in these scenarios—and of course each network is unique in its bandwidth needs, geographic locations, tolerance for outages, security choices, and other factors. However, the key takeaway we hope to communicate is that it’s increasingly crucial to model different configurations and understand how they might change budgets, sourcing options, and network strategy.

Our goal is to understand how the WAN is changing beyond cloud and SD-WAN adoption—and help enterprises and vendors alike model costs and make plans for the future.

We'd love to know if there are future posts we could do that are relevant to the decisions you or your customers are making in the WAN space. Tweet us at @TeleGeography or email us at hello@telegeography.com with your ideas. Looking forward to them.