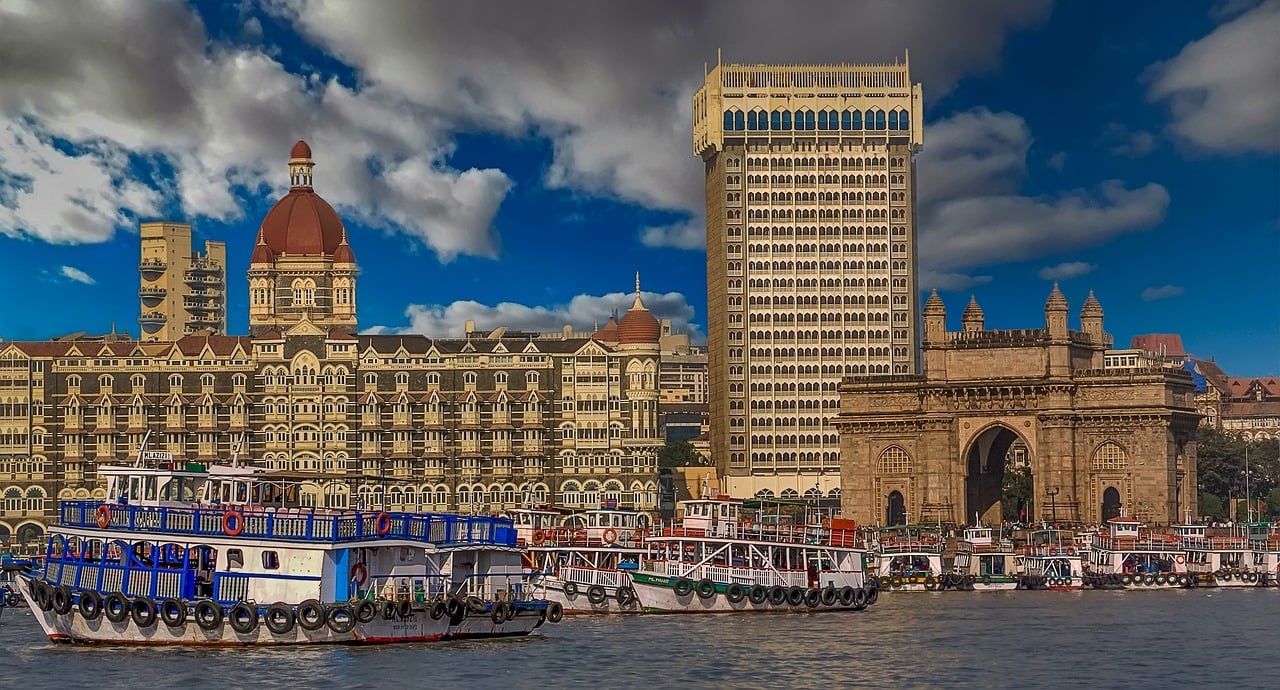 Jio Prepares for Round Two

The stage is set for India’s second telecom battle in the space of three years.

In September 2016 India's mobile market was transformed by the launch of Reliance Jio Infocomm. Their low-cost unlimited plans proved an immediate hit with consumers and led to a dramatic price war as incumbent cellcos raced to compete.

So strong was its desire to make a splash, that for the first six months not only did Jio undercut its rivals, it offered entirely free connectivity.

So strong was its desire to make a splash, that for the first six months not only did Jio undercut its rivals, it offered entirely free connectivity. 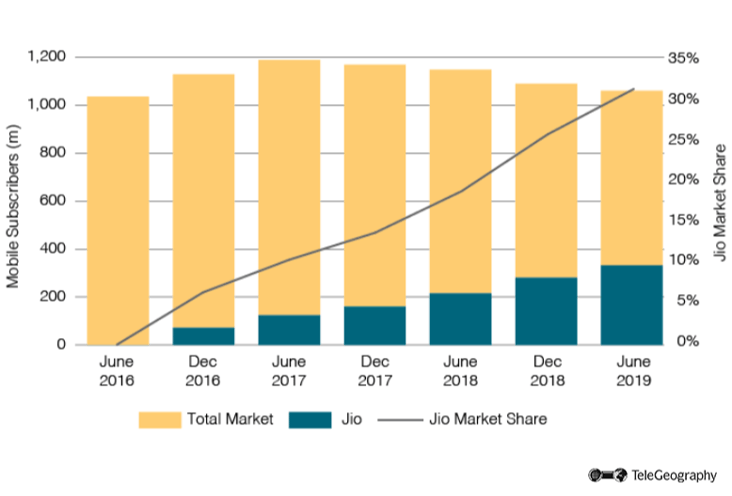 At the end of June 2019 the firm claimed over 330 million subscribers, giving it more than 31% of all users and first place in India’s overall mobile market, which is remarkable for a company that had been in operation for less than three years.

Jio’s launch had the effect of rapidly lowering mobile operator revenues, as we reported back in August 2017.

Competitors and trade unions alike complained that the industry watchdog—the Telecom Regulatory Authority of India—and the government’s Department of Telecommunications were favoring the newcomer over incumbent operators.

Complaints centered on Jio’s free introductory offers that had been cleared by regulators. Critics said that such predatory pricing tactics should be considered anti-competitive.

With rival operators looking to trim costs by cutting inactive and low-income lines, the Indian mobile market saw its first net subscriber losses since 2012, when a spate of license cancellations led to the closure of several networks.

With rival operators looking to trim costs by cutting inactive and low-income lines, the Indian mobile market saw its first net subscriber losses since 2012, when a spate of license cancellations led to the closure of several networks.

Although operators have seen customer numbers decline recently, there is still room for growth. At around 79% at mid-2019, the wireless penetration rate is still way behind the regional average.

Meanwhile, Jio is looking to capitalize on its success in the cellular sector by breaking into the fixed broadband market.

And if India’s mobile market still presents an opportunity to win new customers, the wireline segment is even more inviting. Less than 7% of households are subscribed to a fixed-internet service as of June 2019. The average rate for Asia is over 50%, but this includes nations like Japan and South Korea where penetration figures are sky-high. A better comparison would be countries with a similar GDP per capita figure, but here too, India trails, as this group has an average rate of over 11%.

At the end of June 2019 there were around 19 million fixed broadband subscribers in India, with state-owned telcos Bharat Sanchar Nigam Limited and Mahanagar Telephone Nigam Limited claiming more than half between them. 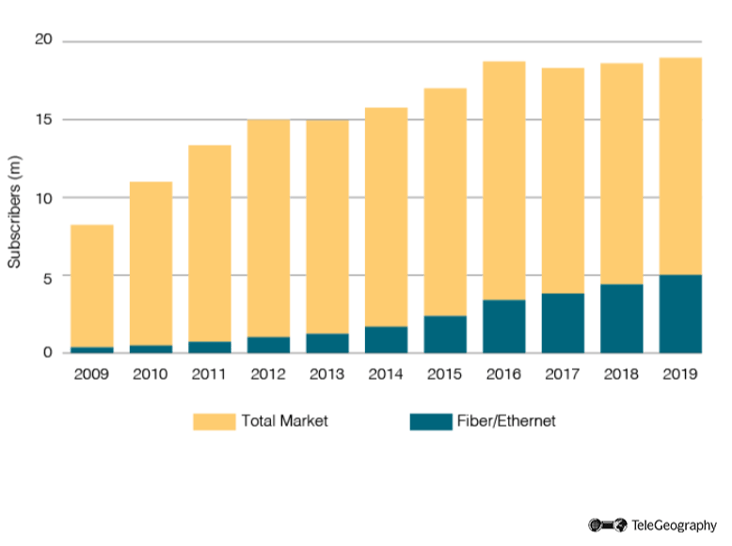 Of the country total, high-speed fiber-optic and Ethernet lines contributed an estimated 5 million connections between them. This figure is growing rapidly as privately-owned operators look to compete—especially in big cities—with their state-run rivals.

It's in the fiber market where Jio wants to make its second grand entrance. It’s launched a range of fiber-based products with an aim to reach 1,600 cities, installing infrastructure in the main urban markets over the past two years.

It’s also taken a stake in cable companies Hathway and DEN Networks to help speed up its network plans.

Its new JioFiber tariffs range from the Bronze plan—which offers a 100Mbps connection and 100GB of bandwidth per month for INR699 ($9.82)—to Platinum and Titanium plans, which provide a 1Gbps service and either 2,500GB or 5,000GB of data transfer per month for INR3,999 ($56.15) and INR8,499, respectively. All products include unlimited fixed-line telephony and TV video calling.

The firm has been accepting pre-registrations for the past year and said it received 15 million expressions of interest—equivalent to three times the size of the current fiber/Ethernet broadband market. Although not all of these will sign up under the first phase of Jio’s rollout, it shows there is sizeable demand for high-speed services.

While state-owned BSNL has yet to respond with its own gigabit service, the largest alternative operator, Airtel, upped its peak download speed from 300Mbps to 1Gbps in mid-September in response to Jio’s launch.

Airtel’s new Xstream Ultra fiber-based service is priced at INR3,999 per month to match the Jio Platinum offer and includes 3,333GB of bandwidth, unlimited calls to other Indian fixed numbers, as well as access to video content from Netflix, Amazon, and ZEE5. Although the Ultra plan is only currently available in 15 cities, Airtel says it intends to expand to more locations over the next few months, with a focus on India’s top 100 markets.

There are also suggestions that Vodafone Idea could be looking to bundle high-speed home broadband services with its 4G mobile internet plans as it looks to stave off the growing threat from Jio.

Although its rivals are not taking the challenge lying down, Jio has already battled its way to the summit of the mobile market and will now be hoping for similar success in the broadband arena.