We're still buzzing from WAN Summit New York. Our largest summit to date, we were joined by an elite ensemble of networking experts who guided us through conversations on security, cloud, hybrid WAN rollouts, NFV, and much more.

If you sadly couldn't make this year's event, chew on these three takeaways. It's just enough food for thought until we hit the road again later this year.

MPLS is Out. Long Live MPLS. 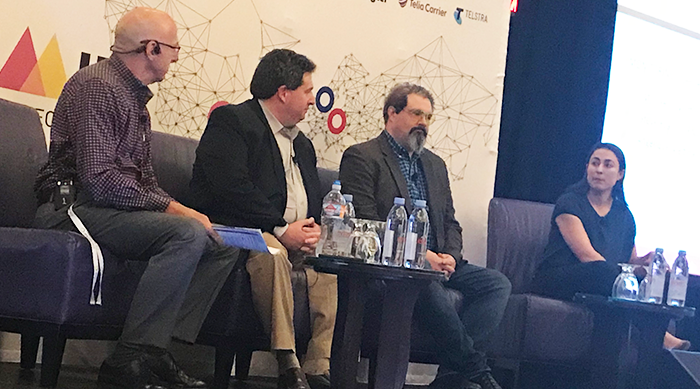 SD-WAN Experts' Steve Garson leads a discussion on peak performance in the "post-MPLS" WAN. But is MPLS really going away?

The most lively debate we saw was centered around the future of MPLS.

Some of our experts are moving away from it entirely, signaling MPLS' imminent death. Others—including panelists from Zayo and Nuage—saw a place for MPLS in the future.

ThousandEyes' Angelique Medina even suggested a model in which more  managers keep their MPLS circuits, but reduce their overall dependency on them. Although some end-users similarly confessed an attachment to their MPLS, the architecture of the future is cloud-centric. (The abundance of cloud conversation at this year's gathering made that clear.) This means that local internet breakouts might have a stronger business case.

All in all? It's far from guaranteed that MPLS will thrive in the coming years.

Sure, your boss likes the idea of saving some money via a new network configuration. But for many of the SD-WAN migrations we've seen in the last year, price might not actually be the primary driver.

Network managers reported growing interest in SD-WAN's potential to increase bandwidth and improve performance. (We also saw shades of this is our recent WAN Manager Survey.)

TeleGeography's Paul Brodsky asks an expert panel about delivering the cloud—including how to secure the environment.

Network security is evolving. Where it used to be about access to a network, it's now about the specific privileges of each individual user and the devices associated with that person.

Adapting to this new model of security is a team sport.

Multiple experts advocated for getting a security team involved in network decisions from day one, examining security implications before adopting SD-WAN. To that end, our fantastic panel on challenges in network security underscored the ways SD-WAN can increase visibility for network managers and security professionals—if they get on the same page from the very beginning.

There is much more to discuss. We hope our friends in Europe are already registered for WAN Summit Frankfurt, where we'll continue this conversation on all things WAN in May. Paul Brodsky is a Senior Analyst at TeleGeography. He is part of the wholesale network, internet, and voice research team. His regional expertise includes Europe, Africa, and the Middle East.