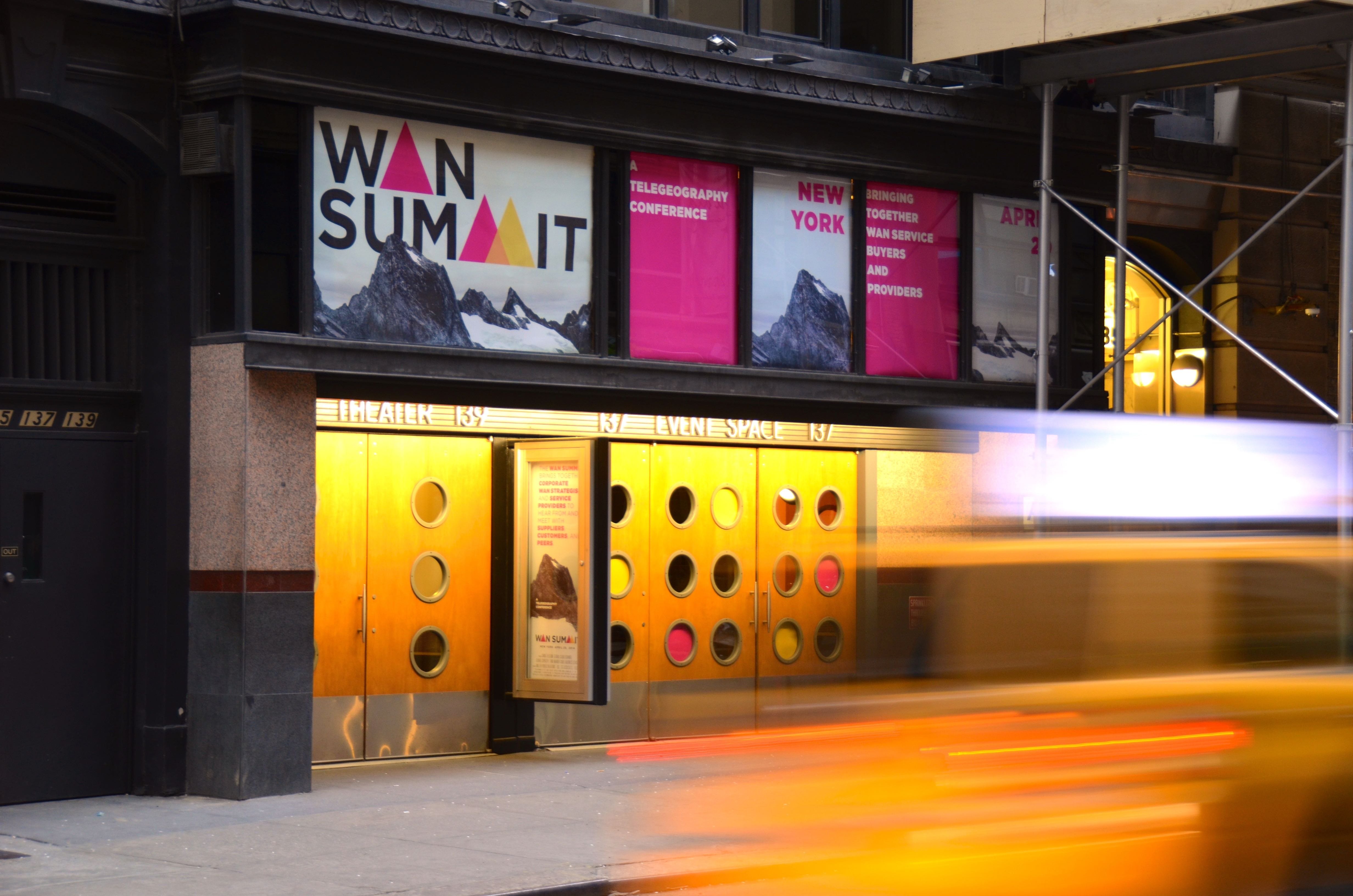 We founded the WAN Summit with the intention of creating a space where enterprise network managers and vendors could come together to discuss trends in corporate networking. While our summits cover everything the WAN touches, it’s no secret that one topic has been at the forefront of many attendees’ minds: SD-WAN.

Since 2015, WAN managers across industries have taken the stage to share their trials and triumphs in deploying SD-WAN on their networks. For anyone considering SD-WAN who wants to separate the marketing buzz from reality, hearing from peers is invaluable.

We’ll be back soon with more stories from network professionals (WAN Summit New York has been tentatively rescheduled for October 6-7, 2020.) In the meantime, here’s a round-up of case studies we’ve heard over the years on SD-WAN.

Cost savings are a major motivation for enterprises to pursue SD-WAN. A consistent message—which we’ve confirmed in our own hypothetical models—is that, while dramatic network cost reductions are possible, more often companies are looking to add internet connections to keep up with rising bandwidth demands without breaking the bank.

Kristan Kline of Kaiser Permanente, a non-profit healthcare company, broke down the calculus he and his team did when appraising SD-WAN at the 2016 New York WAN Summit.

Traffic was forecasted to grow 20-40% per year on their expensive MPLS links. Instead of continuing down the MPLS path, they implemented local breakouts for internet-bound traffic at a lower cost.

Traffic was forecasted to grow 20-40% per year on their expensive MPLS links. Instead of continuing down the MPLS path, they implemented local breakouts for internet-bound traffic at a lower cost.

“The goal is to be able to handle our high growth rate by leveraging the internet for internet-bound traffic, freeing up MPLS for critical traffic and using all the links more efficiently,” said Kline, who describes this as their "hybrid edge." They implemented SD-WAN to address increased bandwidth demands without increasing costs, while improving network performance and visibility.

Global logistics company DHL was also facing the prospect of bandwidth growth outpacing the budget to support it. In his 2017 presentation, Head of Network Architecture Michael Becerra explained that implementing a hybrid WAN infrastructure with SD-WAN-supported internet breakouts would allow them to dramatically increase capacity at lower costs.

DHL ran proof-of-concept trials to demonstrate how short term cost savings could be used to invest in hybrid WAN as a tactical technology. “We focus on countries and areas where we see the most cost benefit,” Becerra said.

Network managers have long been seeking solutions to increased bandwidth usage from cloud applications as well as the network and performance issues that come with trying to route internet-bound traffic back to the datacenter firewall.

Many found their solution in deploying SD-WAN to establish a primary path for cloud or internet traffic directly over internet transport.

In 2015, business software firm Intuit explained their path to SD-WAN deployment. Since “at least 60% of Intuit’s traffic is Internet-bound,” they wanted to take advantage of direct-internet connections to lower network costs and improve performance. They also talked about how the data center is now a “transit point” rather than the center of the network architecture.

Intuit Principal Network Architect Manish Gupta explained that they were slowly transitioning their network from twin MPLS lines to one MPLS line with a DIA line for internet traffic and fail-over. Most enterprises with a brownfield environment are likely to slowly roll-out SD-WAN to sites. Gupta walked through how they ensured network resiliency while some sites were hybrid and others still on the legacy design.

More recently, manufacturing company BorgWarner explained how their SD-WAN deployment facilitated their shift to “cloud-first” technology strategy, including adoption of storage-as-a-service. Currently, 60% of their traffic is headed for the internet. They expected that number to rise as cloud application use increases.

While we’ve seen that MPLS will probably stick around for a while, we have indeed seen enterprises who took the leap into all-internet WANs with their adoption of SD-WAN.

In fact, one of the first SD-WAN testimonials we heard came from the airline services company Gate Group, which had phased out their MPLS network in favor of all business broadband connections back in 2015. Gate Group's audit of its business broadband options revealed an opportunity to provision 10 times the existing bandwidth while improving network control and reducing costs by 25%. Since then, they have also integrated their network security solution into their SD-WAN overlay.

Cushman & Wakefield wanted to future-proof their WAN by phasing out their MPLS circuits. They did their research to develop their business case for SD-WAN (including consulting TeleGeography’s WAN Cost Benchmark tool 😉) before landing on an all-internet solution. “It became clear that MPLS is not the future for our company, we needed to deliver the internet quickly to our branches,” explained Global Engineer Laurence Andrews. “We get more Mbps per dollar, faster installation, service portability, local ownership of the service, all sorts of benefits.”

“It became clear that MPLS is not the future for our company, we needed to deliver the internet quickly to our branches,” explained Global Engineer Laurence Andrews. “We get more Mbps per dollar, faster installation, service portability, local ownership of the service, all sorts of benefits.”

For those who opted to maintain some of their legacy network, implementing SD-WAN still left the door open to the possibility of eventually shifting their underlay away from MPLS.

As Daryl Yeo, Senior Network Technology Adviser at agricultural firm Cargill, put it, “We can now switch out the core network easily without affecting the regions. The core is a L2 VPLS in nine locations, it’s 18 circuits, so very easy to switch. I’m starting to ask why can’t we have locations which are internet only, with no MPLS. Why do we need MPLS?”

4. Have a Plan to Sell to Stakeholders

Huge changes in enterprise networks can be as politically challenging as technically so. Presenters emphasized the need to create a strong business case. Moving beyond the argument of simply cutting network spend, these experts explained how improved network performance and visibility ultimately boosted business and end-user productivity.

For example, technology company Sensata took its first step toward SD-WAN by identifying the business case and selling the benefits to the rest of the company. They found savings in eliminating legacy hardware and software, as well as improved functionality and productivity.

“As we acquire companies, we’ll get quicker and lower cost integration, as well as higher service levels and performance,” explained DeLorenzo.

For the network team at GE Digital, overcoming initial resistance from the security and operations teams were one of their biggest hurdles in deploying SD-WAN. “As soon as we said ‘we’re going to take sites directly to the internet,’ they freaked out,” GE Digital Principal Architect Gary Holland recounted.

Holland emphasized the need to get everyone on board when making big changes to the network and noted that while sites were hesitant to go first, once users started to experience benefits “now it’s not a case of ‘who’s going to go next?’ but ‘why am I not next?’”

5. Picking Your Partners is Key

Some people prefer going the DIY route with SD-WAN. But those with a smaller network team often turn to vendors or managed service providers to assist with the roll-out and management of their SD-WAN. For them, finding a vendor who meets their needs is key. Going with a managed option gives WAN managers the option of getting an end-to-end service level agreement for their hybrid WAN. Service providers may be better equipped to manage local internet providers who require foreign language skills.

There are a wide range of partners available: consultants, network operators, managed service providers, or even carriers.

Buying an SD-WAN service from a network operator can be a good choice for multi-location enterprises, particularly if those locations are spread around the globe, as it provides middle mile control that may not be achievable with a DIY SD-WAN solution. For example, electronics company Volex went with a managed SD-WAN service from Aryaka Networks to address concerns with CPE management and get an SLA for internet performance.

David Stork, IT Infrastructure Manager for Detmold Group, partnered with Coevolve, a global company focused on advising enterprises on and assisting with their adoption of SD-WAN, when he started to look at SD-WAN. Together Detmold and Coevolve designed and planned an SD-WAN network for Detmold, conducted proof of concept tests, and completed a full deployment to their global sites.

Elizabeth Thorne is a Research Analyst at TeleGeography. Her work is focused on enterprise research and the WAN Summit.